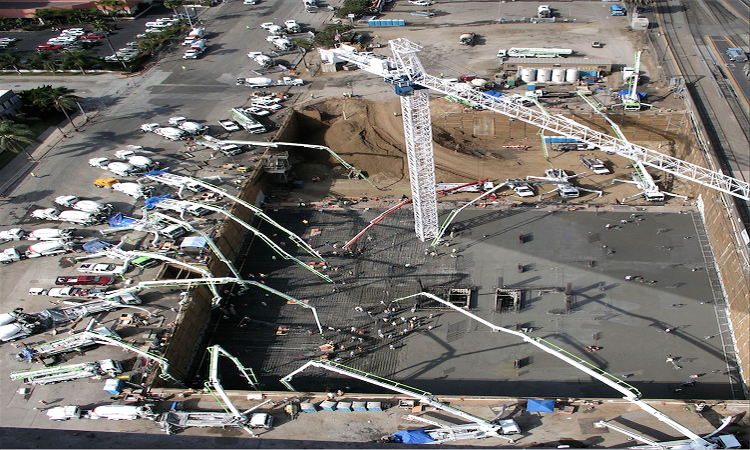 Mass concrete or massive pours is defined as any volume of concrete with dimensions bigger enough to require measures to deal with the generation of heat from the hydration of cement & adjustments within the attendant quantity to reduce cracks.

Concrete of large or massive structures has always posed a great challenge to civil engineers in the past. However, life is slightly easier now, as excellent and reliable equipment is available to produce, transport, place, compact, and finish concrete. In addition, various types of mineral admixtures and chemical admixtures are available to modify the properties of concrete both in plastic and hardened form to meet the demanding situations of a massive concrete pour.

Large volumes of concrete or mass concrete are required to be placed in dams and water retaining structures. They have their own problems & challenges to face. However, the large building rafts and densely reinforced deep equipment foundations are equally challenging even though the volume of concrete required is relatively less than in massive dams.

Large concrete pours or mass concrete has to be executed considering the ambient temperatures and their location. The most important factor is planning which has to start from the design stage itself. During the concrete pour, reliability of equipment, consistent quality of materials and their adequate quantity, speed of concrete production, and teamwork between workmen play an important role.

The grade of concrete specified for the structure also plays an important role. Cement content in the mix can cause a serious problem with the heat of hydration. Generally, the high workability of concrete is preferred in densely reinforced foundations. This requirement along with high strength has to be very carefully examined vis-à-vis the cement content of the mix. Optimizing cement content to avoid excessive heat generation without sacrificing strength or workability is therefore important.

The ambient temperature at the time of concrete is extremely important. Hot or warm weather can cause a serious drop in workability or hardening of concrete resulting in difficulty while placing. These can result in undesirable cold joints and a high-temperature gradient between the concrete surface and the core. In extremely cold weather, it is necessary to maintain concrete temperatures above 10oC, at the time of placing and later covering/protecting the concrete surface from extreme cold. It is preferable that the temperature gradient between the core and concrete surface should not exceed 25oC. However, higher gradients are permitted depending on the structural design.

The concrete mix design must be finalized after considering the following factors:

The following concrete mix parameters, considering the above factors, will have to be seriously considered:

Factors Need to be Consider for Mass Concrete Production

The following factors have to be considered.

Factors Need to be Consider for Mass Concrete Transportation

Concrete transportation whether in hot or cold weather has to be done in the shortest possible time. The following factors need to be considered while transporting the concrete;

Factors Need to be Consider for Mass Concrete Placements

Proper planning is necessary to ensure systematic placement at a fixed rate without cold joints or segregation. The following factors need to be considered:

Concrete compaction using needle vibrators is generally done in mass concrete works. However, self-compacting concrete if used would be ideal and would not require any vibration at all. Assuming normal concrete will be used, the following factors need to be considered.

In massive pours, the exposed surface area will need curing or protection immediately depending on the ambient conditions. In warm/hot climatic conditions, it is recommended to cover the freshly cast concrete with a plastic sheet or alternatively cover it by spraying a curing compound. Using chilled water for surface curing in warm/hot climatic conditions is not advisable. This can aggravate the cracking of concrete due to the development of thermal stresses. It is also advisable to retain the side formwork for at least 7 days or till such time the temperature in the core areas of the pour starts dropping.

In cold climatic conditions, the top concrete surface needs to be covered with an insulating cover to maintain the warmth from the concrete’s heat of hydration.

It helps in the faster development of strength. This will help in reducing the temperature differential between the core and the surface and therefore reduce the chances of thermal stresses developing resulting in the cracking of concrete.

If evaporation losses are prevented during the 7 day curing period, then moist curing or wet curing may not be necessary under any ambient conditions. If mineral admixtures or blended cement are used, the curing period will have to be extended by additional 7 days.