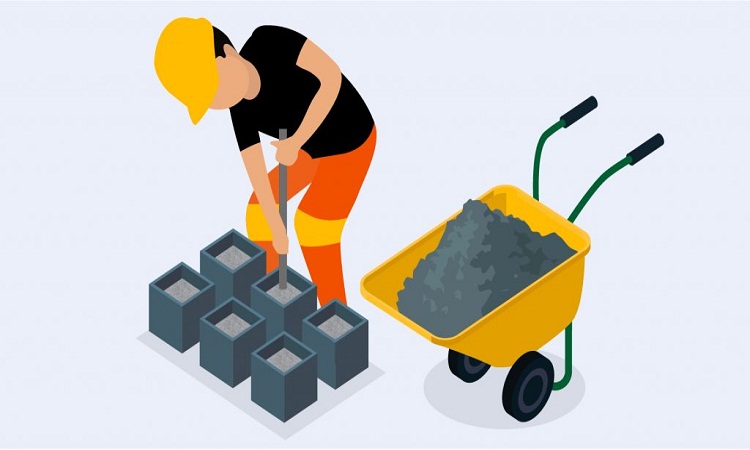 The compressive strength of concrete depends on many factors such as water-cement ratio (W/C ratio), cement strength, quality of concrete materials, and quality control during the production of concrete, etc.

Purpose of the Test

The main purpose of carrying out this test is given below:

The cube strength does not necessarily indicate the strength of concrete in the finished concrete structure as it does not take into account subsequent steps such as transporting, placing, compacting, finishing, and curing.

Samples from which the test specimens are moulded should be representative of the concrete entering the structure and considerable care is, therefore, required during sampling.

The following points must be considered while sampling.

The following types of equipment are required for casting concrete cubes for compression strength.

The cube moulds must be made up of only steel or cast iron. The cube moulds are usually made up of three parts. Two halves constitutes the vertical sides of the cube and base plate. The two vertical halves are bolted together and then fixed on the base plate by clamping. Precaution is required to be taken to ensure that all three parts are of the same manufactured assembly or unit.

These parts often get exchanged with parts of other cube units, and therefore, do not match each other, resulting in either leakage of cement slurry and/or incorrect shape and size of concrete cube.

The inside face of these units must be planed and machine finished to a high degree of accuracy. If the surfaces are not planed and are pitted or scratched, the concrete cube will not have a correct shape and will result in incorrect compression strength.

Similarly, all internal angles of the moulds must be at right angles and within ± 0.5 Deg. There are chances that either due to a mismatch of the three units or due to improper fixing or manufacturing defects, the internal angles may not come right, which could lead to incorrect cube test results. The distance between opposite faces shall be within ± 0.2mm.

All internal faces especially at the edges and joints should be clean and free from hardened concrete, mortar, or dirt. If cleaning is not proper the edges will not sit firmly or correctly, resulting in the shape of the concrete cube.

When assembling the moulds, the flange faces and contact surfaces of the bottom of the mould and base plate should be thinly coated with mould oil to prevent leakage during filling. It is recommended to use a thin layer of grease when concrete workability is very high. It is equally important to apply mould oil on all internal mould surfaces to prevent the adhering of concrete on the steel surface or to prevent damage to concrete when the moulds are being opened up.

Cube moulds should be well looked after. They must be cleaned after every use and oiled to prevent them from rusting while not in use for a longer period. Do not store cube mould in the open nor store them in an open form. All units must be bolted and clamped and store together.

The tamping rod shall be a steel bar of 16 mm diameter and 600 mm long, with bullet head at the compacting end.

Small Size Scoop to fill concrete in the cube moulds

Filling of cube moulds must be done in three layers each approximately o 50mm thickness. The concrete must be placed using a scoop and the scoop should be moved around the top edges of the cube mould so that the symmetrical distribution of concrete is done in each layer as the concrete slides down from the inclined scoop into the cube moulds.

The concrete should be compacted well in each layer leaving no chance for air entrapment within its mass. When air bubbles no longer appear on the top concrete surface it is understood that the concrete is fully compacted. Continue vibration or compaction until such time the concrete in the mould overflows and it is not possible to fill in more concrete.

Finally, trowel the surface level within the top of the mould. Identification mark, number, and/or date can be lightly scratched on the wet troweled concrete surface using a match stick or a scraper. Heavy-handed scratching using sharp-edged steel tools is not recommended.

Procedure for Identification, Curing, and Testing of Concrete Cubes

After finishing the concrete, the cube mould should be immediately covered with damp hessian cloth or transferred to a room where-in the relative humidity is 90% and the temperature is 27 ± 2oC.

Compression testing machines indicating the deviations from the rate of loading and having an arrangement to manually control the same during the tests are also available. Computerized compression testing machines automatically controlling the rate of loading are available in overseas countries and are most appropriate for accurate results. The compressive strength is calculated by dividing the failure load by the mean dimension of the section under the load.

Precautions Required to be Taken When Making Cubes

The concrete shall be deemed to comply with the strength requirements, as per IS: 456, if:

It involves equal cracking of all four exposed faces with little or no damage to the faces (top and bottom) in contact with the platens. Cracking is usually of a vertical zig-zag pattern.

At times four vertical faces of concrete cube break away leaving two truncated pyramids one inverted over the other. This is sometimes accompanied by an explosive sound.

Concrete cubes may get crushed on one side or will develop a tensile crack on one face or more faces and fail.

These types of failures will give a lower indication of the compressive strength of concrete. These are usually due to defects associated with the testing machine. Faulty manual operation, the faulty placing of the cube, the faulty casting of the cube are also responsible for such defective failures.

Concrete cube testing and maintaining good cube test records do not mean quality control of concrete works. Often, the records show excellent cube results, but the actual quality of concrete is extremely poor. Concrete cubes are often cast with a stiffer mix (lower water to cement ratio) or using additional cement while actual concreting is done without any regards for water to cement ratio, which in turn influences the strength and durability of the structure. This approach has to change and the engineer must produce concrete of good durability and good strength for the structural members, rather than for keeping cube test records satisfactory.

Concrete will deteriorate and disintegrate and give indications of bad quality after a few years, even though concrete cube test results were found to be very satisfactory.

Conversely, a concrete structure constructed may be of good quality, but the careless procedure for sampling, casting, curing and testing of concrete cubes may give unsatisfactory results indicating low strengths. Careful monitoring of each and every step is necessary for this important test of concrete.