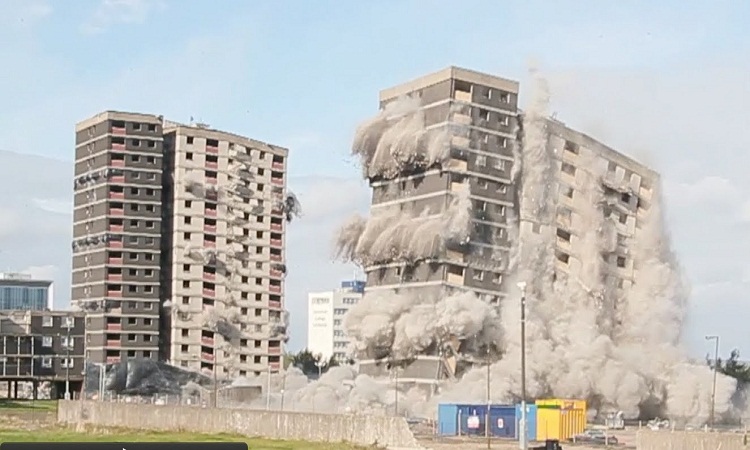 What is Building Demolition?

The building demolition technique means destruction, tearing down, breakup, removal of some parts of the building or whole structure, generally demolition is carried out when the life of the building is over or to construct a new structure by replacing the older one, also it is done when the structure lost its stability or having any structural damage.

There are too many methods utilized for building demolition for the safe & careful removal of existing buildings & structures to use the land for some other purpose.

There can be numerous reasons for the building demolition such as structural damage, illegal construction, and loss of stability or plans to restructure.

Requirements to Demolish the Building

Demolition of the building is necessary for the following conditions:

If any building to be demolished is surrounded by other residential buildings, you are required to find appropriate means to properly demolish the building, therefore demolition method selection is pivotal.

There are different types of methods in the Mechanical Demolition Technique which are described below:

Demolition of building with this method utilized a wrecking ball, which can weigh up to 13,500 pounds. The wrecking ball method has been used for many years and is still popular since it is so effective.

The crane operator must be very good and skilled at his job. If the operator doesn’t control the swing of the structure and either hit the surrounded structures.

This method of demolition is very noisy & generates a lot of dust, which does not make it popular with those around the worksite.

The pusher arm demolition technique is newer than the wrecking ball method and solves some of its problems.

In this method, professionals attach a long arm to a piece of construction equipment such as an excavator and use it to pull sections of the structure down.

After the equipment pulls the parts of the structure to the ground, the remaining demolition crew will do the work to break them up even smaller so they can be discarded.

The pusher arm technique is only utilized for buildings that are over 20 meters tall. Generally, if the structure is shorter than this, the wrecking ball method should work is best suited.

A burning bar or thermic lance is a tool that heats & melts steel elements or concrete in the presence of pressurized oxygen to create very high temperatures for cutting.

Flame is produced by having a supply of pure oxygen with a temperature of 2500 degrees centigrade to melt the reinforcement or concrete.

In this technique of building demolition, some rounded halls are drilled along the desired line of separation & are filled with slurry which is a special material.

In the deliberate collapse method, the key structural elements of the building like beams & columns are systematically removed or weakened so that the structure can be deliberately lowered.

This method for building demolition is utilized only for the demolition of a building that is separated from the surrounding building & the ground level should be almost level.

This method is not suitable for the prestressed concrete structure.

In the pressure jetting method, a water jet is released from the nozzle at high pressure (250-300 MPa) on the concrete structure. This jet breaks the plain concrete due to abrasion.

The rear part of the visible element that is to be broken by the water jet should be shielded so as not to damage nearby individuals & property.

The water utilized in water jets should be recycled & reusable.

In this special technique of demolition, professionals carefully place the explosives to knock out a building’s structural supports, causing it to collapse in on it. The process is very effective & takes very little time for demolition.

The implosion technique for demolition is mostly utilized in urban areas on very large structures. When the whole process is done perfectly, the implosion should stay within the perimeter where the existing structure stood so the process does not interfere with any nearby buildings or property.

The fundamental idea of the implosion technique is very simple, in which if the support of the building is removed from a certain point in front, the upper part of the structure collapse on the lower part.

This method is an advanced technique for the demolition of high-rise buildings or structures.

In this method, the explosives are arranged in such a way that the whole structure falls inwards towards its center of gravity.

The deconstruction method is a slow & careful process that is almost the reverse process of building construction.

Factors to be Considered While Selecting the Demolition Method

The factors listed below should be taken into consideration while choosing the method of demolition:

Size of the Structure

Select the method of demolition keeping in view that the time available for the demolition.

The behavior of structures, etc.

Safety Measures to be Taken During Demolition of Building

Followings are some safety precautions to be kept in mind while starting the project of demolition of building:

Choosing the right demolition method is necessary and it needs to be done safely and correctly so the surrounding neighboring building or structure does not get affected. Employed a demolition expert who has the skill & experience of undertaking structure detail, soil property investigation, and safety of the surrounding buildings and public areas before execution of the building demolition project.