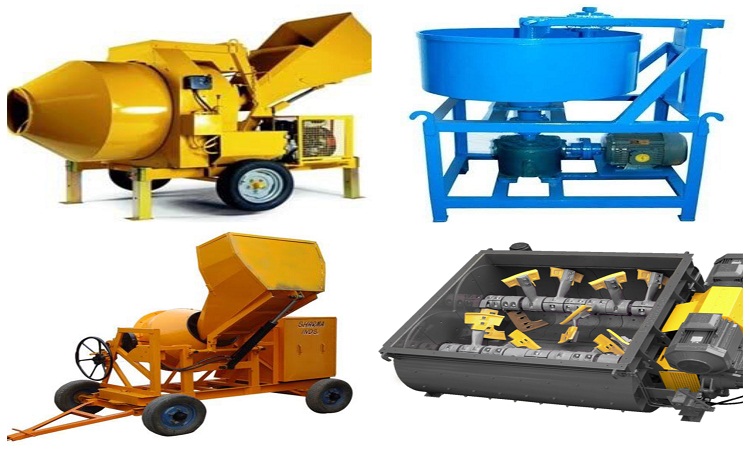 May 3, 2021May 3, 2021
Mastercivilengineer
no comment on Types of Concrete Mixers

What is Concrete Mixer?

Concrete mixers are machines that mix cement, aggregates, and water together to produce the concrete mechanically. A good concrete mixture shouldn’t only uniformly mix the concrete ingredients, but should also discharge the concrete mix without disturbing it’s uniformly. This can be judge by the uniform consistency and color of the slurry.

In the absence of concrete mixers at the construction site, concrete can also be mixed manually. Though, this is applicable to only small amounts of concrete. Additionally, laborers are prone to mix concrete poorly and, in many cases, end up over-mixing it. Subsequently, it is advisable to utilize machine mixers to mix concrete materials.

Types of concrete mixing equipment can be classified generally into four types.

In this type of concrete mixer, the drum rotates around the horizontal axis. The drum is loaded by means of the loading skip/hopper which is pulled up or lowered by means of a wire rope and pulley movement. The discharge chute at the other end unloads the mix when it is manually dropped to allow the mixed concrete to slide & drop. The non-tilting drum mixers have generally higher capacities than the tilting drum mixer.

The inner surface of the non-tilting drum is fitted with helical blade lifters which scoop up the concrete materials on the way up & drop them on the way down as the non-tilting drum rotates. This causes intermixing of the batch materials. There are basically two types of non-lifting mixers. One with a chute rotates only in one direction called the non-reversing type and the other the reversing type mixer with two sets of blades in the drum. One set is used to mix the concrete in one direction and another set is used to unload the concrete when the direction of rotation is reversed.

As per BIS 1791-2020 the following non-tilting and reversing types of mixers are being manufactured (the number representing its normal batch capacity in liters and letters NT and R representing “non-tilting” and “reversing’ types respectively).

The reversing type mixers are more extensively used in making mass concrete using large-sized (over 150 mm) aggregates. The most popular amongst the above types are the 200 NT and 375 NT.

In this type of concrete mixer, the drum is conical and revolves around an inclined axis. The mixing is generally carried out at a drum inclination of 20o to 30o to the horizontal. It’s either charged through a skip which is lifted up through a wire rope & pulley movement as expressed above or through a manual feeding directly into the mouth. Though, manual feeding is commonly done for the small capacity of concrete mixers. The tilting drum mixer is more convenient for very stiff workabilities as the entire mix can be easily emptied or discharge by tilting the drum.

The interior of the drum is fitted with blades and baffle plates to act as scoops. The appropriate speed of drum rotation and the internal alignment of blades/baffle plates cause disruptive forces between the wall of the drum and its contents resulting in the concrete materials being intensively turned over the agitated.

These types of mixers are good if the concrete mix is designed for medium or high workability. Their performance and efficiency reduce if mixes of lesser or stiffer workabilities are to be mixed.

As per BIS 1791-2020, the following tilting type drum mixers are being manufactured (the number representing its normal batch capacity in liters and letter T representing “tilting type”.

The most popular mixer is the 200T which is also known as the 10/7 mixer. This means that 10 ft3 of loose material will give 7 ft3 of compacted concrete.

In this kind of concrete mixer the drum is fixed or free running with the blades rotating around the vertical axis.

Pan type concrete mixers are very efficient as the concrete mixing process is faster & spraying of water on the mix is uniform and assists in efficient mixing. The loading of these mixers is generally done in a similar manner as for drum mixers. The skip unloads the aggregate (fine aggregate and coarse aggregate) materials from the top; cement is separately added through another hopper which is loaded by a screw conveyor or manually.

Water is added through the nozzle inlets on the perimeter of the pan. The mixing arms are centrally mounted. However, at times to tackle very stiff and difficult mixes it has one or more eccentrically mounted arms or an agitator which also rotates as it resolves. The mixed materials are unloaded from the sliding gate at the bottom part of the concrete mixer.

There are various types of pan mixers accessible depending on their mechanical design. They are as follows:

The design feature in the counter-rotating pan is that it rotates clockwise, while the mixing components rotate anticlockwise. The entire volume of the concrete in the pan gets mixed thoroughly achieving high mixing speed.

Generally, stationary pan with rotating mixing arms are in use at construction sites. In pan mixers, the mixing arms rotate in the anticlockwise or reverse direction & positive action of these components upon the materials to be mixed achieve efficient mixing. This action is further improved by scarping blades which force the materials back into the mixing area.

In a counter-current mixer on account of high differential velocities, a three-dimensional mixing effect is created with only a small number of mixing elements running at low speed. However, in pan mixers due to the high kinematics of the mixing process, there is greater frictional wear between the materials and the steel body of the mixer and its arms. In the tilting and non-tilting drum wearing of interior surfaces of the mixers is much less. The parts of the pan mixers which come in direct contact with the materials are therefore lined with replaceable wearing plates. This mixer also consumes higher power than the other types of concrete mixers. The pan mixers are more ideally suited for efficiently mixing fine-grained materials due to the intensive mixing effect.

As per BIS 12119-1987, the following pan type mixers are covered (the number represents its normal batch capacity in liters, and letter P indicates “pan”).

As compared to pan mixers the single shaft paddle mixer has compact, advantageous internal dimensions. The helical inclination of the paddles gives an optimum mixing effect producing an intensive counter flow mixing. The paddle mixers are found more appropriate where dry mixes are required. However, they are generally appropriate for all ranges of workability from stiff to very high.

These batching & mixing plants have modernized concrete production using microprocessor controls with the latest state-of-the-art technology. These modern batching & mixing plants have very high manufacturing capacity, very great accuracy, and can be handled by just a single operator. They are fully computerized and automatic, semi-automatic, or can be even run on the manual mode of operation. Capacities of these plants range from 30 m3 per hour to 200 m3 per hour. The plants have sometimes two mixers that can work simultaneously. The weigh batching process is more accurate & sturdy not requiring numerous calibrations. In the weigh batching process, moisture and water adjustments are automatically controlled depending on the workability of the concrete mix required.

The modern type of batching and mixing plants has various types of aggregate storage such as star pattern open bins; tall cloverleaf silo, pocket silo, or inline silos. Aggregate materials are filled into a weighing system automatically & loaded into the mixer for batching process. Cement is stored in bulk in soli and is weighed separately in a different hopper. Cement is generally transported by a screw conveyor belt from the silo to the weighing hopper and fed into the mixer separately. The proper quantity of water is added into the mixing drum directly. Water is sprinkled evenly on the materials of concrete as they are being mixed.

These batching plant mixers have usually more discharge so that the transit mixers can be loaded conveniently below them for transporting the concrete at the desired location.

Discharging or Unloading a Mix

The whole content of the drum of the concrete mixer should be emptied before recharging the drum for the next batch. The drum must be emptied onto a single hopper or container from which it can be picked up and transported either manually by head pan or by wheelbarrows. Discharging the mix directly in the head pan or wheelbarrows may cause segregation.

The concrete mix should not be discharged with a large height to avoid segregation of materials. Commonly, the fallout height is restricted, between 60 cm to 120 cm for tilting drum, non-tilting drum & reversing drum type mixers, and about 150 cms for high discharge type mixers. Wet (moisture) or highly workable mix has a tendency to segregate the materials; hence it is advisable to remix it with a shovel before filling up the wheelbarrow or head pan.

The mix from the concrete batching plant is discharged from a height into a transit mixer which agitates the mix & helps the mix to get uniformly remixed in case it has segregated.

If the concrete mixer discharged into a chute the concrete will segregate & lose finer materials. Therefore, it is necessary to make a mix that has adequate cohesiveness & workability to slide down the chute with ease but without segregation.

Just before the operation of mechanical mixing is closed, it is necessary to clean the drum and blades free from all adhering concrete materials before it hardens. It is generally advisable to add around three head pan of coarse aggregates and around 10 to 15 liters of water in the drum and allow it to rotate for a couple of minutes till all adhering materials have come off. The contents are then discharged again to clean & the mixer drum is once again flushed with water.

There is always a normal tendency of the workers/labors, to leave as soon as concreting operations are over. The man who operates the mixer must be made responsible for the closing operation. By leaving an uncleaned and unwashed concrete mixer will result in a loss of time prior to the next mixing operation at the construction site. Chipping off materials& banging damages the mixer body and destroy its efficiency and results in poor mixing. Unclear inner surface also slows down the mixer capacity due to the building up of concrete/mortar on the blades and the internal surface of the drum.

It would be advisable to wash and brush the mixer with soap water and then flush it with clean water.

Previous article
Methods for Mixing of Concrete and Their Procedure
Next article
What Causes Cracks in Concrete Basement Floors?