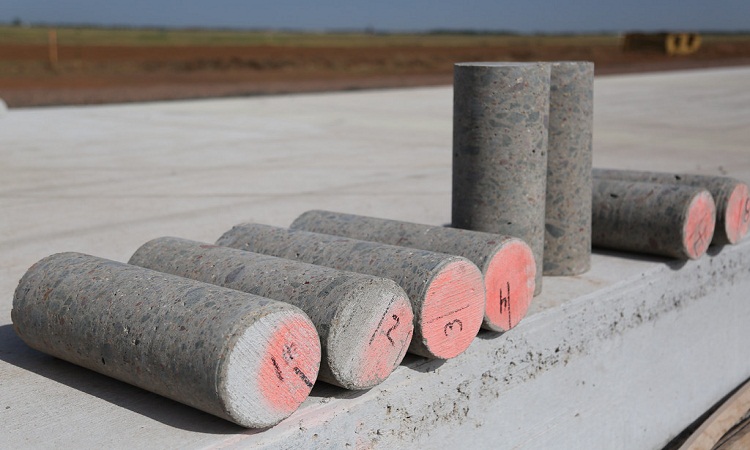 August 5, 2020January 17, 2021
Mastercivilengineer
no comment on Concrete Core Test – Checklist for Testing and Factor Affecting Strength of the Concrete Core

The factor that are significant which influence the compressive strength of core are :

It has been observed that as the L/D ratio increases, the measured strength decreases due to the effect of specimen shape and stress distribution during the test. For establishing a relationship between core strength and standard cube strength, the ratio of L/D = 2.0 is taken as the basis of computation.

Position of cut out concrete in structure:

Cores taken from near the top surface have usually the lowest strength may it are a column, beam, wall, or slab. With the increase in depth below the top surface the strength increases but at depths more than 300 mm, there is no further increase in strength. The difference maybe 10% to 20%. In the case of slabs, poor concreting increases this difference.

Due to the layering effect, the measured strength of the specimen drilled vertically relative to the direction of casting is likely to be greater than that for a horizontally drilled specimen from the same concrete.

It has been observed that in-situ, concrete gains little strength after 28 days. Tests on high strength concrete have shown that through the core strength increases with age up to 1 year, but remain lower than the 28 days standard cylinder strength as shown in the figure. On the other hand, Petersons have suggested the increase in core strength over that of 28 days cylinder strength as 10% after 3 months and 15% after 6 months. Thus the effect of age is not easy to discuss, but in the absence of definite moist curing, no increase in strength should be expected.

Effect of End Condition of the Core

When the core is tested in compression, the top surface of the core is brought into contact with the platen of the testing machine. If the top surface is apparent somewhat rough and not truly plane, stress concentration is introduced hence resulting in a reduction strength of concrete.

The end of the specimen that is not plane within 0.05 mm. are to be capped. To avoid this loss of strength, the end surface should essentially be made the plane. The ill-effects of the uneven end surface of the core can be eliminated to a great extent by either capping the core with suitable material or grinding. Test specimens may be capped with a thin layer of stiff Portland cement paste or mortar of stiff consistency using cement similar to that used in the concrete and sand which passes IS sieve 300 but retained in IS sieve 150 or sulfur mixture consisting of 1 part of sulfur to 2 or 3 parts o inert filler such as fire clay or hard plaster having a compressive strength of at least 420 Kg/cm2. The following are essential for all capping materials:

Effect of the Height/Diameter ratio (H/D ratio) on Strength

Readers are that standard cylinder test specimens are of height “h” equal to twice the diameter “d”. in the case of cores cut from in-situ concrete, the diameter of the core depends on the diamond-studded cutting tool. The height of the core will depend on the thickness of the concrete member.

It is necessary to apply a correction factor whenever there is a deviation in the diameter or height of the core and/or when the h/d ratio does not equal 2.0. Different correction factors as given below can be used.

For the value of h/d smaller than 1.5, the measured strength increases rapidly owing to the restraining effect of platens of the testing machine. When h/d varies between 1.5 to 4.0 the strength reduction is very little. For h/d values between 1.5 to 2.5, strength is within 5 percent of standard specimen h/d = 2. From this figure, it is apparent that the choice of standard h/d ratio of 2 is suitable because a slight departure from this ration does not seriously affect the measured value of strength. If the core is too short, it is necessary to estimate the strength of the same concrete as if it had been determined. Such a situation may arise when cores have to be taken from road pavements, airfield pavements, roof slabs, and foundation concrete.

If the structural adequacy remains in doubt, the accepting authority may require carrying out load tests, particularly in the case of floor or roof systems. On the other hand, if time and conditions permit, a sincere effort may be made to improve the strength of concrete in place by supplemental wet curing for some time. It is necessary to verify the effectiveness of such treatment by conducting strength evaluation tests once again before giving acceptance.