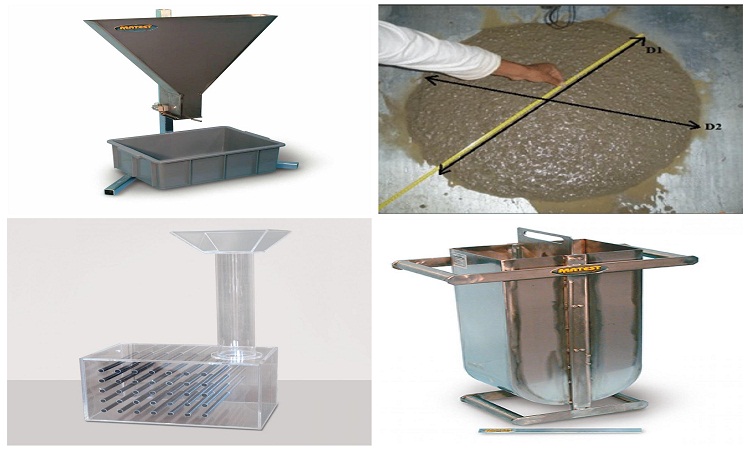 May 9, 2021May 9, 2021
Mastercivilengineer
no comment on Methods of Testing Self Compacting Concrete Workability

There are three basic properties of self-compacting concrete (SCC) namely flowability, passing ability (free from blocking due to presence of reinforcement), and resistance to segregation (stability/homogeneity). Therefore, it is very essential to carry out field trials or mock trials to assess these attributes. Unfortunately, so far not a single test has been devised to confidently measure any one of these characteristics of concrete. Several tests have been found out and utilized by many organizations but all these tests are elementary in nature and none of the tests has been standardized.

The most commonly used tests for self-compacting concrete are the Slump Flow Test, “V” Funnel Test, “L” Box Test, ‘U’ Box Test, and Fill Box Test. In addition to these all tests there are other tests like the ‘J’ ring test, etc. The first five tests are briefly described below:

This is one of the easiest and simplest tests initially developed in Japan for the analysis of underwater concrete. The slump flow test is the most commonly used test for self-compacting concrete (SCC) and gives a good assessment of filling ability. Though, it gives no indication of the ability of the concrete mix to pass between the reinforcement without blocking but may give some signals on resistance to segregation of materials. This test can be utilized at the site location to analyze the consistency of supply of ready mix concrete, which has been designed after assessment of various characteristics based on the above mentioned five tests or more.

Slump flow is the average diameter in 2 perpendicular directions of the concrete spread after the concrete had stopped flowing on leveled flow table. The slump flow time is the time taken for the concrete to spread by 50 cm. A high slump flow value specifies greater flowability & lower resistance to segregation of materials. If the time value is perceived to be less than the minimum range value identified then it indicates that viscosity is very low leading to segregation. If the time value is observed to be more than the maximum range value specified, it indicates very stiff and non-flowable concrete.

The procedure for the implementation of the test is as follows:

As per the current guidelines, T0 from the test should be in the scale of 8 to 12 seconds and T5 should be less than 3 seconds over T0. If T5 is greater than 3 secs over T0 then there are some chances that the Self Compacting Concrete (SCC) mix will segregate.

L Box test is utilized mainly to analyze the passing & filling ability of self-compacting concrete (SCC). The instruments for the L box consist of an “L” shaped rectangular box section. The concrete mix is designed to pass along the obstructions of known clearances. The vertical section of the box is filled with concrete & the gate is uplift to let the concrete flow into the horizontal section along the vertically placed steel bars. When the flow of concrete stops the height of the concrete mix (h2) at the end of the flow is measured along with height (h1) in the vertical box next to the obstruction. The ratio h2/h1 is a measure of the passing ability of self-compacting concrete (SCC). The blocking value for self-compacting concrete (SCC) should be between 0.80 to 1.0. If the blocking value is lower than 0.80 it suggested that viscosity is too high. A ratio close to 1, indicates false results.

Both segregation resistance & passing ability can be identified during the test visually also. If concrete forms a plateau in front of reinforcement steel bars, concrete has either got blocked or has segregated.

The procedure for performing this test is briefly discussed below:

This test is used to assess the passability of self-compacting concrete (SCC).

This apparatus has a “U” shape and an opening with a sliding gate is fixed between the two sections with vertical steel bars as obstructions. Concrete is designed to flow through the obstructions & the level difference between the top surfaces of concrete in both the compartments is measured.

The method for performing U Box test is briefly discussed below:

This test is utilized to analyze the filling ability of self-compacting concrete (SCC). The instrument consists of a transparent rectangular box with a number of obstructions through which concrete is made to flow.

The method for conducting this test is discussed below:

Typical acceptance test criteria for Self Compacting Concrete (SCC) with maximum aggregate size up to 20mm are given in the below table.

Typical ranges of values indicate in the above table are based on current knowledge and practice. They have undergone changes with respect to the previous range values. Hence, future developments/experience may lead to further modifications in the ranges indicated. Values outside these ranges may also be acceptable if it can be demonstrated that satisfactory performance is obtained in the specific conditions, e.g. large spaces between reinforcement, layer thickness less than 500mm, the short distance of flow from point of discharge, very few obstructions to pass through in the formwork, very simple design of formwork, etc.

Previous article
What is Plastic Cracking of Concrete? Its Occurrence, Causes, and Preventive Measures
Next article
Different Types of Cover Block/Spacers at Construction Site