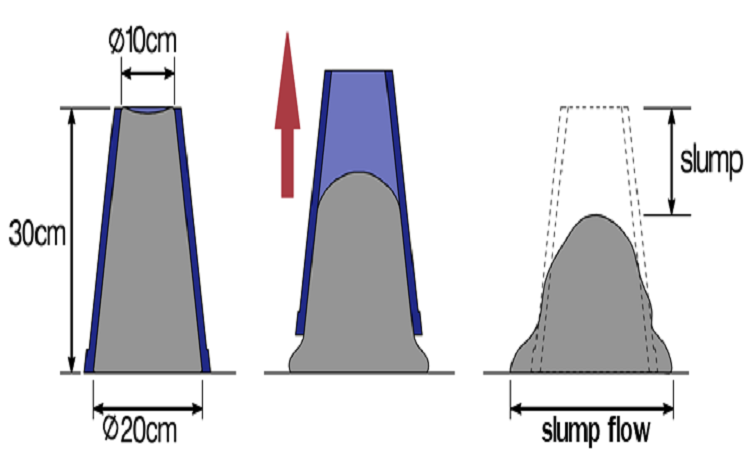 What is Slump Cone Test?

A Slump test or Concrete slump test is to determine the workability or consistency of the concrete mixture prepared in the laboratory or at the construction site during the progress of work. The concrete slump cone test is used for the measurement of a property of fresh concrete. The slump cone test is an empirical test that measures the workability of fresh concrete. More specifically, it measures the concrete consistency between batches.

The slump cone test for workability is the simplest test and is most often used at construction sites and must be carried out using the apparatus complying with IS 7320 – 1974.

In the Slump test, the distance that a cone full of concrete slumps down is measured when the cone is carefully lifted from around it. The concrete slumps can vary from zero for dry mixes to complete collapse for very wet and lean mixes.

The accuracy of the slump cone test is generally limited to about 25 mm of the intended value when the workability of each batch is compared with earlier batches.

The following equipments are required to carry out the slump test:

A standard slump cone – 300 mm (12 inches) height, bottom diameter of 200 mm (8 inches), and top diameter of 100 mm (4 inches). The mold must be provided with foot pieces and handles similar to those shown in the figure. The mould can be either with or without a seam. The interior of the mould shall be relatively smooth, and free from dents/projections.

It is extremely important to clean all equipment after they are used and all equipment must be stored in a covered store and not left lying about on open site.

Slump test can serve as an indication for three factors:

Frequency of the Slump Test

It is important to do a slump test preferably in the first batch as soon as the concreting work starts. This is necessary so that the correct water addition is finalized to give the required workability. Thereafter this slump test is performed whenever the mix does not seem to be right and adjustment of water is desirable.

Slump cone test is also necessary for every batch of concrete sampled for cube test so that in case of cube failure some conclusions can be drawn whether the mix had higher W/C or in other words it had more workability than that of the recommended mix.

The slump cone test must be taken as soon as possible at about the same time after mixing.

It is necessary to take proper samples which must be representative of the batch which is to be tested.

The following procedure is required to be followed:

Before unloading the entire load, it is the essential that slump test is taken from the concrete from the transit mixer. The sample is taken in a similar manner as described in the sampling.

As Practiced in UK

As Practiced in USA

This option is to be used only if one addition of water is permitted on the job provided such addition does not increase the water/cement ration above the maximum permitted by the specification.

The slumps can be generally classified into three types.

If the shear slump is obtained one more test should be taken for concrete workability. If this also shears and does not come true then it is due to the non-cohesiveness of the concrete mix. The design mix must be reviewed. Such concrete will segregate very fast while transporting, placing, and compacting and is likely to cause porosity and durability problems.

Similarly collapsed slumps are also not desirable and can happen when the mix is too wet and non-cohesive. Such mixes will also segregate very fast while transporting, placing, and compacting and are likely to create serious porosity and durability problems.

A slump test can be separately reported or reported along with cube test results.

The following must be recorded.