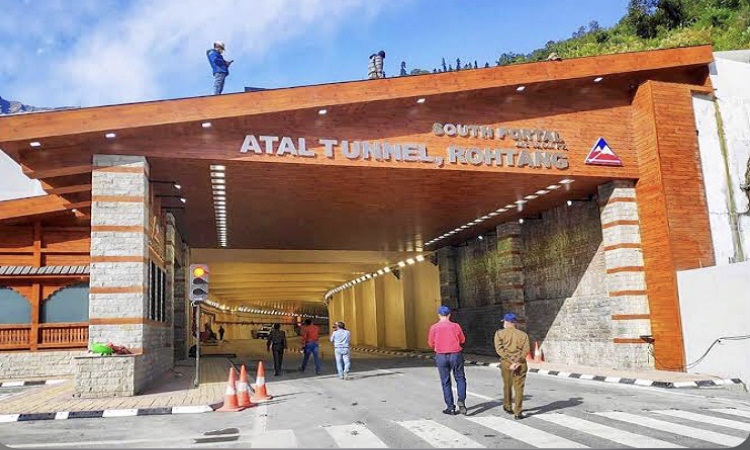 Atal Tunnel is a highway tunnel built under the Rohtang Pass in the eastern Pir Panjal Range of the Himalayas on the Leh-Manali highway in Himachal Pradesh, India. At 9.02 km length, it is the longest tunnel above 10,000 feet (3,048 m) in the world and is named after former Indian Prime Minister Atal Bihari Vajpayee.

The tunnel reduced the distance between Manali and Leh by 46 km and reduced the travel time by 4 to 5 hours without any threat of road blockade or avalanche.

The 117 km distance from Manali to the south of the pass to Keyong on the north side of Rohtang Pass via Gramphu is usually covered by vehicles in about 5 hours to 6 hours without counting the long hours of traffic jams on the hilly route. The same journey is much easier now as Manali to the South Portal of the tunnel is 24.4 km approx 50 mins, through the tunnel is approximately 15 mins and without traffic snarls and North Portal to Keylong is 37 km approx 60 mins.

It was inaugurated by Prime Minister Shree Narendra Modi on 3 October 2020. The approximate cost of this project is 3200 crore.

The most challenging task was to continue the excavation during heavy snowfall in winter. Excavation for tunneling was done from both ends. However, as Rohtang Pass closes during the winter, the north portal was not accessible during winter & the excavation was being done only from the south portal in winters. Only about ¼ of the entire tunnel was excavated from the north end and ¾ was excavated from the south end. There were more than forty-six avalanche sites on approaches to the tunnel.

Other challenges to the progress of the tunnel included difficulties in disposing of more than 800,000 m3 of excavation rock and soil, heavy ingress of water as much as 3 million liters per day in June 2012 that required constant dewatering, costlier treatment, and slowed the progress of excavation from 5- meter per day to just half a meter a day and unable rocks that slowed blasting and digging. A cloud-burst and flash flood on 8th August 2003 killed 42 laborers who were building the temporary access road.

Salient features of the proposed Atal tunnel are as follows:

The following parameters have been set in design.

A 2.25 m high and 3.6 m wide emergency tunnel will be integrated into the tunnel cross-section (c/s) beneath the main carriageway for evacuation during emergencies.

The latest Austrian Tunneling Method and Ventilation System – semi transverse type considered as safest- will be adopted for this project. Heavy snowfall in the area of Rohtang Pass is a major concern, especially on the approach roads to the main tunnel. To prevent any damage to the roads and to ensure the safety of the roads & tunnel users alike, avalanche control structures are being constructed. The design for these structures is being provided by the snow & avalanche study establishment of DRDO.

As the Atal Tunnel or Rohtang tunnel will witness heavy traffic, vehicular management and checking pollution is a priority. For this, CCTV cameras would be placed at a regular distance and will be further connected to two monitoring rooms on both ends of the Atal tunnel. Sensors to check the pollution level will keep on updating the data and if the record is above the desired level, then the quantity of fresh air injected inside the tunnel would be increased. Pollution will be controlled within 90 seconds adding that two heavy-duty fans each on both openings of the tunnel will be installed to inject fresh air inside.

The tunnel will have a semi-transverse ventilation system, where large fans would separately circulate air throughout the tunnel length. Another safety feature being added is that fire inside the tunnel will be controlled within an area of 200 meters and fire hydrants will be provided on specific locations.

The tunnel will also have a public announcement system to make an important announcement in emergency situations for which loudspeakers will be installed at regular distances.

Manav Energy, a Bangalore based engineering firm, has provided the design and validation for electrical and instrumental earthing to the tunnel. It is the same firm that has installed lighting protection atop the Burj Khalifa Dubai tower.

Here Are Some Interesting Facts about Atal Tunnel