Use of Geotextile in Construction and Future Scope 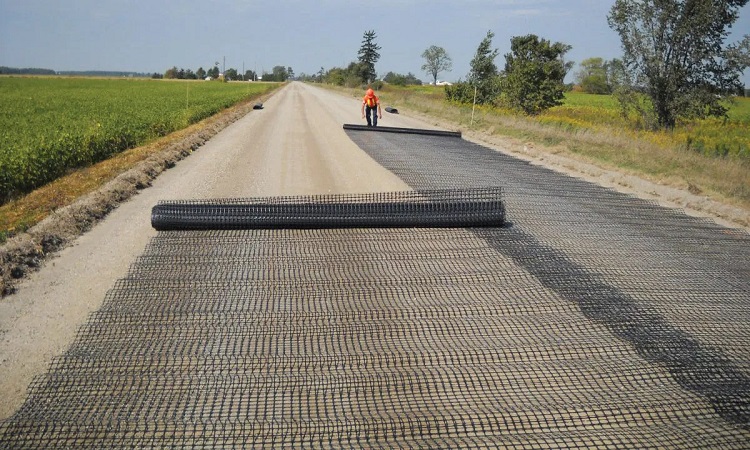 Use of Geotextile in Construction and Future Scope

Geotextiles are permeable or porous fabrics manufactured with polyester or polypropylene. Structurally, they have tiny pores & hence allow for the flow of gases or liquids. Geotextiles can resist extreme conditions & have excellent durability properties.

Geotextiles are large sheets that save our earth’s soil on rainy days & bind strongly. It is mostly used for filtration and separation in road construction. It protects from the migration of small gravels & sand aggregates. Geotextiles are thin & strong membrane fabric that is used to reinforce soil & prevent damage.

Types or Classification of Geotextile

Geotextile is divided into two ways. They are-

Types of Geotextiles Material Based on the Manufacturing Process

Geotextiles can be manufactured by weaving or knitting or nonwoven technologies. Geotextiles are differentiated as follows:

1. Woven geotextiles: They are manufactured with the interlacement of two sets of yarns at right angles in the weaving process. Woven geotextile materials have more strength & modulus in the warp and weft directions and low elongations at rupture.

4. Stitch-bonded geotextiles: They are manufactured by interlocking fibers or yarns or both, bonded by stitching or sewing. Also, strong and heavyweight geotextiles can be produced rapidly. Tubular geotextiles are manufac­tured in a tubular or cylindrical fashion without a longitudinal seam.

5. Geogrids: These are materials that have an open grid-like appearance. The main application for geogrids is the reinforcement of soil.

6. Geonets: It is open grid-like materials manufactured by 2 sets, of course, parallel, extruded polymeric strands intersecting at a constant acute angle. The network shape is a sheet with in-plane porosity that is utilized to carry relatively large fluid or gas flows.

7. Geomembranes: These types of geotextiles are continuous flexible sheets manufactured from one or more synthetic materials. They are relatively impermeable & are utilized as liners for fluid or gas containment and as vapor barriers.

8. Geo-composites: These are manufactured from a combination of two or more geosyn­thetic types. It consists of geotextile-geonet; geotextile-geogrid; geonet-geomembrane; or a geosynthetic clay liner (GCL).

9. GCLs: These are geo-composites that are prefabricated with the help of a bentonite clay layer, typically incorporated between a top & bottom geo­textile layer or geotextile bentonite bonded to a geomembrane or single layer of geotextile.

10. Geo-pipes: These are perforated or solid-wall polymeric pipes utilized for drain­age of liquids or gas.

11. Geocells: Geocells are relatively thick 3-D networks constructed from strips of polymeric sheets. These strips are fixed together to make intercon­nected cells that are filled with soil & sometimes concrete.

12. Geofoam: Geofoam blocks or slabs are created by the expansion of polystyrene foam to form a low-density network of closed, gas-filled cells.

According to Time of Use

1st Generation: Geotextiles that were being manufactured for another purpose, such as carpet or industrial sacking, but later used for geotechnical purposes are known as 1st generation geotextiles.

2nd Generation: Geotextiles that were manufactured for a certain geotechnical purpose, but without adopting modern technology.

3rd Generation: Geotextile fabricated, designed, and produced to meet certain end-use. It is an actual geotextile.

The scope of geotextiles in the civil engineering field is very vast, including the following applications:

Roads: Geotextiles are widely used in road construction, reinforcing the soil by adding tensile strength. It can be utilized as a rapid dewatering layer in the roadbed.

Railways: Geotextiles are utilized to separate the individual soil layers, without impeding groundwater circulation where the ground is unstable. This also keeps the materials layer from shifting sideways under the constant shocks & vibrations from passing trains.

Agriculture: Nonwoven fabrics are used for mud control, and to improve paths and trails used by cattle or light traffic.

Drainage: Geotextiles are used as filtering mechanisms for drainage in roads, highways, earth dams, reservoirs, retaining walls, drainage trenches, and many other applications.

Coastal work: Geotextiles can help prevent erosion in river banks, canals, and other bodies of water.

This is the main function of why geotextiles are utilized in the construction industry. When a geotextile is placed between two different layers of soil, it will prevent intermixing when water gets into the soil strata. By segregating fine subgrade soil from the aggregates, which is the case of roads, the geotextile preserves the drainage properties and strength of the base material.

These geotextiles have special thickness and permeability properties, to prevent soil contamination and allow water flow without compromising structural integrity. Different application areas of geotextiles include:

• Between landfills & stone base courses

• Between subgrade & base in paved and unpaved roads

• Between subgrade in railroads

The filtration properties of geotextiles are used when there is a need for water to move in both directions. These kinds of geotextiles can be woven or nonwoven, and they are utilized to prevent fine aggregates from moving between the soil layers.

The two main characteristics of geotextiles that involve infiltration are porosity & permeability. Depending on these characteristics, geotextiles can also promote the lateral flow of water, dissipating kinetic energy from the capillary rise of groundwater. Applications of this type of geotextile can be both vertical & horizontal, helping solve drainage problems along roads & structures.

There are 3 key elements when designing geotextiles to improve soil characteristics:

• Friction or movement restraint between the geotextile and the soil

The role of geotextile reinforcement is comparable to the function of steel bars in concrete construction. Geotextiles are utilized for embankments & roads that are constructed over poorly graded soils, implementing the design parameters provided by a geotechnical engineer.

Geotextile fabrics can be saturated with asphalt or other mixes, which makes them impermeable & capable of restricting the vertical flow of water. For this implementation, geotextiles must be nonwoven. Impermeable geotextiles can be used to prevent contamination of soil or groundwaters from pollutants above, also they may help in preventing the loss of potable water due to evaporation.

Geotextiles enhance the substantiality and decline of the process of wind & water erosion. It aids to stop the erosion of soil but lets the water drain off. Geotextiles are produced from synthetic or natural fibers banded together with soil thin pieces. It enhances soil characteristics like Friction or movement restraint, back of loads, and revisions in the bearing failure plane.

Overall, geotextiles are the most enormously utilized tools in civil engineering because they are robust, low-maintenance, easy to install, highly resistant, and durable to weather conditions.

Previous article
How To Control Wastage of Reinforcement Steel at Site?
Next article
The History of Plaster – Common Plastering Defects, and Their Remedial Measures