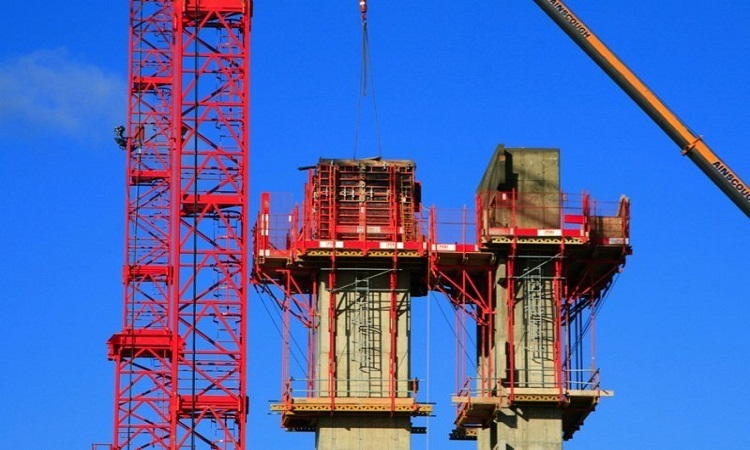 Slip formwork is used for horizontal as well as vertical continuous structures. This type of formwork system is reasonable & also less labor work required in construction, it totally depends on automation eraction techniques.

There are six types of slip formwork methods according to the direction of work.

A vertical slip formwork consists of a framework of horizontal walings and vertical yokes. The slip form panels are connected to each other on the inside of the walings. Each side of the slip form is connected to vertical yokes that keep panels in position. The jacks for the lifting of form are installed on a horizontal crossbeam between yokes. When the slip form is lifted, all the jacks are activated simultaneously. Hydraulic-driven jack is most commonly used. The slip form panel is normally between 1.1m and 1.3m high and made up of steel plates.

Horizontal slip formwork is a method of constructing continuous elements of concrete, such as curbs, drainage channels, and safety barriers. It includes the extrusion of the concrete in situ rather than casting it in short lengths.

Tapered slip formwork is used in the piers, conical chimneys construction, cooling towers construction, and other tall concrete structures including constant or changing thickness in diameters, walls, and/or shapes. Formwork is used with sections that overlay so that one gradually slides over the other one.

It’s normally done in the construction of chimney but it isn’t satisfactory for architectural concrete because the lap shows, while the tapered slip-forming process is similar to that used on the standard slip-forming, tapered slip formwork requires more attention, contractor experience, and expertise to ensure the success of such projects.

The cantilever formwork is utilized as climbers that are independent of cranes & attached to a large area of formwork at story height. In this type of formwork, shuttering has already been completed, which is part of the structure between individual levels of climbers.

Egg-shaped slip formwork is based on the jump form principle that can be modifying to any geometrical shape. Individual curvature adjustment can be acquired by adjusting the axis & vertical circumferential slope.

Egg-shaped slip formwork can be adjusted independently on each side of the wall and products of optimal working condition.

Conical slip forming is a system by which it is possible to construct structures of varying wall thickness and tapering walls. It is assembled by cantilever plates and overlapping plates, which are fastened to steel yoke frames.

Previous article
Five Phases of Project Management
Next article
How Were the Pyramids of Egypt Built?