What is Bacterial Self Healing Concrete? Its History, Application, Advantages, and Disadvantages 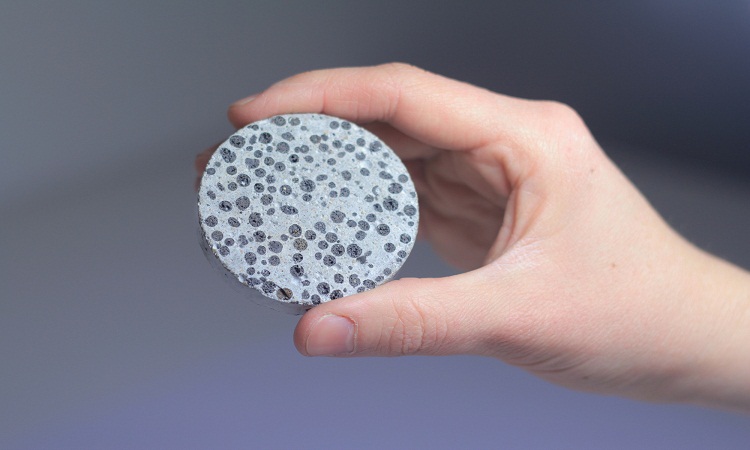 What is Bacterial Self Healing Concrete? Its History, Application, Advantages, and Disadvantages

July 21, 2020February 25, 2021
Mastercivilengineer
no comment on What is Bacterial Self Healing Concrete? Its History, Application, Advantages, and Disadvantages

Bacterial self-healing concrete is an innovative technology allowing repairing open micro-cracks in concrete by calcium carbonate (CaCO3) precipitation. This biotechnology improves the durability of the structure.

Nowadays alternative approaches in construction technology are evolving rapidly in a bid to crucial the environmental hazards and low sustainability imparted by the prevalent technologies. The use of suitable micro-organisms/bacteria in concrete to improve its pore structure is now an important field of research all over the world. Many researchers have identified different micro-organisms/bacteria suitable for cementitious material for strength and durability improvement by the formation of the main calcite. The present study also deals with the application of the novel bacteria and also its protein Bioremediase in cementitious material to improve the overall behavior of concrete material. This silica leaching bacteria or bacterial protein in its purified by lyophilized from when impregnated into the OPC/PPC based concrete and mortar samples found to increase remarkably the compressive strength, flexural strength, resistance to water absorption, and sulfate attack as well as self-healing attributes of the test specimens. This Bioremediase protein exhibits sustainability across a wide time & temperature barrier. These findings along with fact that this protein does not impart any negative repercussions on human health may render it a prospective agent in construction technology.

Biologically augmentation of the strength of cementitious materials has beckoned researchers around the globe in recent times. Concrete, the commonplace construction material all over the world is ascribed with high compressive strength but modest tensile strength. Its inadequacy of tensile strength paves way for counterbalancing via the use of reinforcements. However, even after reinforcement, cracks surface over the concrete structure as a fallout of applied structural loading, shrinkage, and thermal deformations, most of them are, in the true sense, inevitable and expected within the context of agents in construction materials corrode the structure within, thus bringing down the shelf life of the structures. The occurrence of cracks cut down the load capacity and stiffness of the concrete structure by yielding passage to ions the chief culpable of concrete deterioration. Chloride ions, oxygen, and carbonating agents can pass through the cracks and end up in corroding reinforcing steel, which contributes to the extensive disintegration of concrete structures globally. Hence, the occurrence of cracks is a prevalent form of damage in concrete structures. All these lead to an appreciation of the manufacture and maintenance cost of concrete-based structures coupled with the potential of environmental hazards. In this context, the concept of biomineralization should play an important role.

Biomineralization is a metabolic process of the formation of hard structures or surfaces by combining minerals with an organic combination of some specific micro-organisms. According to Belkova (2005), the metabolic activity of some specific micro-organisms plays a pivotal role in the transformation of many members of the periodic table. Specific microbial proteins influence the biomineralization process either through guiding prevention of formation of mineral deposits. This bio mineralogy concept has been looked into very keenly for the development of new bio concrete material, cleaning of the concrete surface, and imparting micro-organisms directly for inducing calcite precipitation in a concrete crack. The present study furnishes a performance analysis of the novel bacterium BKH1 and its secretary Bioremediase protein regarding compressive strength enhancement, tensile strength, and self-healing attributes of OPC and PPC-based specimens.

This idea of self-healing concrete was first developed in the early 1990s. The concept branched from the idea that concrete without admixtures or biological healing agents is capable of healing itself. This process occurs very slowly and not to be the extent needed to recover water-tightness. Researchers began testing ways to speed up the process. Carolyn Dry, an architecture professor at the University of Illinois at Urbana-Champaign, was the first to seriously consider the idea. She proposed including glass capsules in the concrete that contained methyl methacrylate glue that would be released when the capsules were broken. However, the glue was too viscous to flow fast enough to fill cracks and the glass capsules would not survive the concrete mixing process. Others have tried healing mediums in concrete such as polymers, gels, clays, waxes, and films to varying degrees of success. In the mid-2000s, Jonkers and Schlangen began to research encapsulated methods has the same idea, as described “The trick to making self-repairing concrete is to heal microscopic fissures before they become large cracks”. After success in the lab, Jonkers and Schlangen have constructed the world’s first building of their bacterial self healing concrete that operates by the mechanism. This building provides them with important data on how the material performs in real-world conditions.

What is Bacterial Self Healing concrete?

Concrete is the most important building material used in construction which can withstand compressive forces but not tensile forces. Because of low tensile strength, when it is subjected to tension, it starts to crack this is why it is reinforced with steel to withstand tensile forces, know more about steel reinforcement in construction.

Bacterial Self-healing concrete is the type of concrete that repairs its own cracks by the deposition of limestone (CaCO3) in them. This is because of a process called Carbonation which takes place when the atmosphere in the presence of moisture, and is converted to calcium carbonate.

The equation involved is thus:

The calcium Carbonate formed precipitates out and gets deposited in the pores and cracks f concrete, thus making it’s stronger.

Bacterial Self healing concrete is material that will biologically produce minerals like limestone with the help of bacterial present in it, which will heal cracks that appear on the concrete surfaces.

According to recent research some strains of bacteria mainly the Bacillus Pseudofirmus or Sporosarcina Pasteurii which are found naturally in highly alkaline lakes near volcanoes and are able to survive for up to a staggering 200 years without oxygen or food are activated when they come into contact with water and then use the calcium lactate as a food source, producing limestone that, as a result, closes up the cracks.

In antique times, non-hardening cement is widely used in construction that is why the structures have remained strong for a long time even though they have less maintenance. The Self-healing concept is developed and implemented by Ancient Romans and the live example of their architecture is Pantheon.

Autonomous healing fills cracks through non-hydrated cement particles, which is a natural procedure of repairing cracks that can occur in the presence of moisture or water. In present-day constructions, usage of non-hardening cement is less, and consequently natural or autonomous healing is diminished.

Concrete will continue to be the most vital building material for infrastructure but most concrete structures are prone to cracking. Tiny and wee cracks on the surface of the concrete make the whole structure vulnerable because water seeps in to degrade the concrete and corrode the steel reinforcement, greatly reducing the lifespan of a structure.

Nowadays, the ultimate goal is to develop a technology that can produce a sustainable and eco-friendly structure with more endurance. But due to unskilled labor and quick processing of construction, most of the structures are prone to cracking.

As time goes on, water seeps into the walls and degrades the concrete, and corrodes the steel reinforcement, which decreases the age of the concrete and mortar state.

Repairing cracks on conventional concrete structures usually take more time in which we have to apply mortar on the damaged surfaces. Sometimes, we have to embed mortar into the existing structure with metal pins to prevent it from falling.

All these methods are expensive, as it is complicated to gain access to the repaired surface whether it is underground or at a great height.

How does Self Healing concrete works?

The mechanism of bacterial healing begins when water seeps into a crack formed in the concrete. Many cracks start off as microscopic fissures and this is all the bacteria need to activate. A few types of bacteria are suitable for applications in self-healing concrete, including Bacillus Pseudofirmus, Bacillus Cohnii, Bacillus Sphaericus. The bacteria are embedded into the concrete matrix inside “Spores”, or spherical capsules filled with calcium lactate which serves as a food source for the bacteria when they are activated. The bacteria can survive in the concrete matrix for over 200 years, and they can be reactivated multiple times if the healed area were to crack again. When the concrete cracks, it ruptures the capsules, allowing water to activate the bacteria.

The add-up benefit during this bacterial conversion is it helps to increase the durability of steel-reinforced concrete structures.

Classification of Bacteria base on

Classifications of bacteria based on Shape are:

Classifications of bacteria based on Gram strain are:

Classifications of bacteria based on Oxygen requirement are:

There are various types of bacteria used in Bacterial Self Healing concrete are:

Advantages and Disadvantages of Bacterial Self Healing concrete

Advantages of Bacterial Self Healing concrete

Disadvantages of Bacterial Self Healing concrete

Application of Bacterial Self Healing concrete

The use of bacterial concrete has become more and more popular. It is used for;

The cost of producing Self Healing concrete

The cost of utilization of microbial concrete as compared with conventional concrete. It is one of the main reasons for which this material is not mass-produced and used in the construction industry at the moment. The cost analysis demonstrated that the price of microbial concrete is 2.3 to 3.9 times higher than the price of conventional concrete with lower quality. The high cost of bacterial cultures used in developing the material bacteria and nutrients account for approx 80% of the cost of raw materials is the reason why the initial costs are an order of magnitude higher than for traditional concrete.

The high costs are difficult to justify to investors. The property of bacterial concrete to self-repair and thus extend the life of the building and thus reducing the total cost of the building is not noticed by investors or designers. They only see the high cost of production and, consequently, the initially high cost of the material. Another problem is that most contractors provide a warranty for buildings for 10 years and this does not include cracks. Advantages from such concrete may not be visible for several or even over ten years. Therefore, the probability that contractors will be investing in this material is rather low. There are, however, situations where the benefits of bacterial self-healing concrete are beyond any economic discussions.