The CN Tower – History and Construction 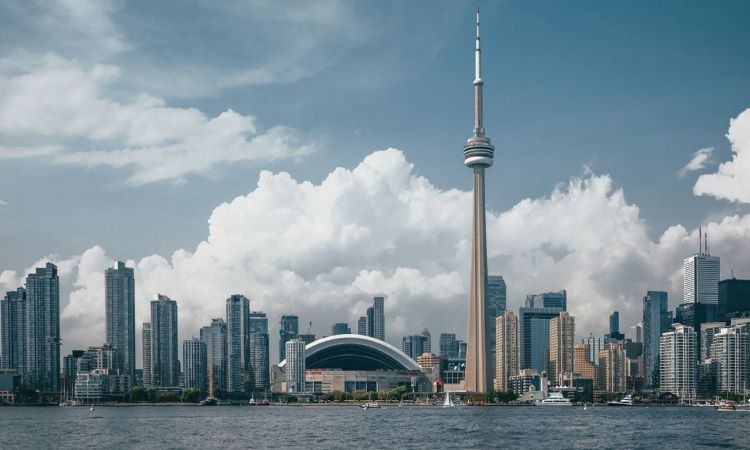 The CN Tower – History and Construction

The CN Tower has several outstanding features and is certainly one of the most fascinating structures in the world for which civil engineers and architects involved deserve to be complimented. This structure overtook the Ostankino Tower in Moscow built in 1971 and has a total height of 1761′ 11″ (537.03 m) of which the lower portion of 1263′ (384.96 m) height is in concrete.

Why was this structure necessary?

In the late 1960s, Toronto’s soaring skyline began to play havoc with radio and television signals from conventional transmission towers. Signals bounced from the city’s skyscrapers causing problems of ghosting on television sets. Weaker and stronger signals competed with each other giving viewers the overlapping effect of watching two channels at one time. It was therefore necessary to have a tower tall enough to transmit the signals without obstruction. The tower had to have a height way above the high-rise buildings in Toronto. An elevation of at least 11001335.28 m was needed to clear all Toronto area obstacles for microwave receivers. Above this height, a 350′ (106.68m) separation was technically necessary between the receivers and the UHF/VHF and FM antennas.

To improve this situation, Canadian National Railways CN proposed building this towering structure that would be way above Toronto’s tallest building. Initially, the plans were to construct a three-legged structure linked by structural bridges. Gradually the design got modified into a single, 1815′ 5″ (553.34 m) high, Y-shaped tower with hollow legs.

Which RECORDS are held by this tower?

Besides being the tallest structure in the world today, the CN Tower also holds the following world records:

What are the SALIENT FEATURES of this structure?

Salient features of CN Tower are as follows:

• Number of visitors per year: Over 1.7 million

• Number of people employed for daily operation and supervision: 550 Nos.

What type of FOUNDATION was necessary for the world’s tallest structure and how was it constructed?

For any tall structure, its foundation plays an important role in its stability. For the world’s tallest structure, it was absolutely necessary for the foundation to be capable of both supporting the vertical load of the tower and resisting pressures induced by winds.

Soil investigation was done making 4 Nos., 30′ (9.14 m) diameter boreholes up to a depth of 100′ (30.48 m). Numerous photographs and test samples were taken to finalize the foundation depth and design. Y-shaped foundation, utilizing 9200 cubic yards (7046 M3) of concrete, 500 T (453.5 MT) of reinforcement steel, and 40 T (36.28 MT) of thick prestressing cables, was constructed in only 4 months. The crisscross post-tensioning cables were used for preventing cracking. The Y shape raft was 22′ (6.71 m) thick and rested on shale at a depth of 50′ (14.24 m). The foundation had nine caverns within it to provide sheltered work space and means for anchoring the vertical tendons of the tower when post-tensioned.

A giant backhoe was used to excavate earth and shale up to a depth of 50′. As the groundwater table existed at a depth of 19′ (5.79 m) sufficient care had to be taken to de-water the pit during excavation and concreting operations.

What were the interesting DESIGN FEATURES of this Tower?

Tall and slender structures have to be designed for large horizontal forces, which occur due to hurricanes, earth tremors, powerful winds, and other effects caused by snow, ice, and lightning strikes.

The tower is designed to resist the projected 1000-year frequency wind of 130 miles per hour (209.21 Km per hour) with a factor of safety of 2. This level is well above nature’s most extreme conditions. Exhaustive tests were done to prove that the tower is totally safe to withstand all types of occurrences, as stated above, an estimated 200 times annually.

Counterweights provided on the antenna correct the wobble during high winds. Copper ground wires were installed for the safety of visitors, during the lightning strikes which occur roughly seventy-five times a year.

The superstructure has a Y-shaped base having maximum dimensions at the ground level and gradually reducing as the structure rises. The selection of fully post-tensioned concrete opted for the structural design process. The main reason for this choice was the fact that fully post-tensioned structures remain essentially uncracked at all loads as against reinforced or partly post-tensioned concrete mix. This makes the structure more durable or long-lasting.  This design also contributed to the economy of the materials, reduction of tower weight, and reduction of load on the foundation. The central hexagonal concrete core was only 24″ (0.61 m) thick.

What was the CONSTRUCTION TECHNIQUE used for the Tower?

From the ground level up to the spacious deck at 1465′ (446.53 m) height, the tower was constructed using the slip form technique.

In slip form construction, concrete was poured 24 hours a day and five days a week. The tower grew at an average rate of 20’0″ (6.1 m) per day. The slipform had a Y shape similar to that of the tower. It accommodated full dimension at the base. As slipform rose, the end portions were jacked steadily inwards to reduce the wings. The protruding ends of the three sides of the Y were periodically cut off. A light tower crane was used to assemble the slip form and it was lifted along with the slip form. This crane handled all materials on the slipform deck. It also helped in dismantling and lowering the remnants of the slip form as it rose and diminished in size.

Concrete used in construction had to be exactly of the right quality, of correct strength, placed evenly, compacted immediately and most importantly it had to gain strength at the optimum time to match the speed (upward movement) of the slip form. If concrete sets and gains strength faster than necessary, it can create a drag (friction) between the concrete surface and the formwork plate. On the other hand, if concrete takes a longer time to set and harden, then it can bulge or crack due to its inability to take the load of the concrete above. As this structure was located in cold climatic conditions, with temperatures in winter dropping below zero degrees centigrade, heaters were provided below the finishing deck followed by an insulated skirt on the external faces. Hot air was used within the core.

The cement used was of Type I (normal) and Type IV (low heat of hydration) Portland cement either singly or in combination, as required by weather conditions. Concrete strengths were checked using accelerated strength test by autogenous curing. Excellent control of concrete strength was maintained with 2 days test. Core tests at ages greater than 28 days showed strengths within a range of 6000 to 8000 psi (422.50 to 563.40 Kg/cm2).

The verticality of the tower was exceptionally well controlled and the variation of plumb was a maximum of 11″ (0.03 m). A 250-pound (114 Kg) steel plumb bob was suspended from the slipform deck down through the central core of the tower into an oil bath below. This was used to monitor the plumb.

There is a tendency of the slipform deck to rotate in response to the earth’s rotation. This was monitored every two hours using optical plumb instruments on the slipform wings. Even though concrete can safely support the weight of the formwork system and fresh concrete above it, it is still relatively soft. Concrete takes days to harden completely. This often resulted in the tower being twisted by the force of the earth’s rotation. To overcome this twisting, three steel cables (ropes) were anchored on the walls below. These ropes were used to pull the tower six degrees back to its correct shape.

Cold weather prevented grouting of ducts containing post-tensioned tendons in winter. Corrosion of these ungrouted tendons was prevented by steadily blowing oil-free dry air up the ducts until summer.

How were the SKYPOD and SPACE DECK constructed?

The Sky pod is the hub of all activities on its tall structure. This has seven separate vets that house all broadcasting facilities, a 416-capacity revolving restaurant, wine cellar, nightclub, and two observation levels. The restaurant revolves and takes 90 minutes to complete one revolution. One of the observation levels is fully enclosed while the other level is partially open. A glass floor on the observation deck has been recently added for brave visitors to inch out over the visual void.

The construction of the sky pod commenced in August 1974. The sky pod took off at a height of 1100’ (335.28 m). The pod is supported on 12 triangular concrete brackets. The construction was done using six formwork sections of steel box trusses and wooden forms. All materials weighing around 318 MT including reinforcement steel were raised after slip forming was completed. Raising was done using 45 hydraulic open-faced climbing jacks located on a temporary structural steel platform at the top of the tower. To build the observation deck, workers bolted brackets to tensioned steel bars and placed concrete in the formwork. The concrete floor cast just above the brackets included a compression ring beam 3’ (0.91 m) deep on the outer circumference. This 12-sided polygonal-shaped ring beam was post-tensioned circumferentially to resist the radial loads.

The radome coating on the doughnut-shaped collar at the base of the sky pod protects the tower’s sensitive microwave equipment from the elements of nature without creating any disturbance to transmission.

How was the ANTENNA MAST installed?

The tower crane utilized during the slipform operations was kept in place to raise the forms and concrete for casting a 16’ (4.88 m) high beam that supports the antenna mast. Thereafter the crane was dismantled into eight parts and brought down by a giant Russian Sikorsky sky crane helicopter called “Olga”.

“Olga” became very popular with the residents of Toronto as they watched it lift 44 sections of the antenna mast one after another. This took nearly 55 helicopter flights within a period of 25 days and resulted in a saving of about 5 months of construction time. These sections were bolted together using over 40,000 bolts.

To inhibit the accumulation of snow and ice, the mast was painted with a 3.8 cm thick layer of Teflon-coated glass reinforced rayon fabric called radome which turns heavy snow into a harmless powder.

How does one reach the observation decks and enjoy the beautiful view?

Four glass front elevators carry the visitors up the outside wall. The distance of 1200′ (365.76 m) is covered in just one minute. These high-speed elevators simulate a jetliner’s take-off unless weather conditions require a much slower ascent. Recently two more elevators have been added to cope with the increase in the number of visitors.

Of course, the other alternative can be climbing 2579 steps of the metal staircase in the interior of the structure. Even if a person does manage this climb without getting breathless, one can rest assured that this person will definitely take a deep breath after seeing the view from the top. If you look North, the city of Toronto appears as a scale model with the tallest skyscrapers dwarfed below and pointing upwards. Towards South 98 miles (158 Km) away is the city of Buffalo and towards West one can see beyond Niagara Falls to the shores of Lake Erie.

However, to see this breathtaking view one has to be lucky with clear weather. Otherwise, surrounded by clouds one feels that he has reached the sky.

In 1995, the CN Tower was classified as one of the Seven Wonders of the Modern World by the American Society of Civil Engineers. Today this structure is 46 years old and inspires not only Architects and Civil Engineers but also common people who would like to Reach for the Sky. The CN Tower has not only solved the television and radio signal transmission problems for people in Toronto but has also provided world-class entertainment and a wide range of unique attractions to tourists from around the world. It has exhibits and food and beverage venues which people from around the world enjoy.