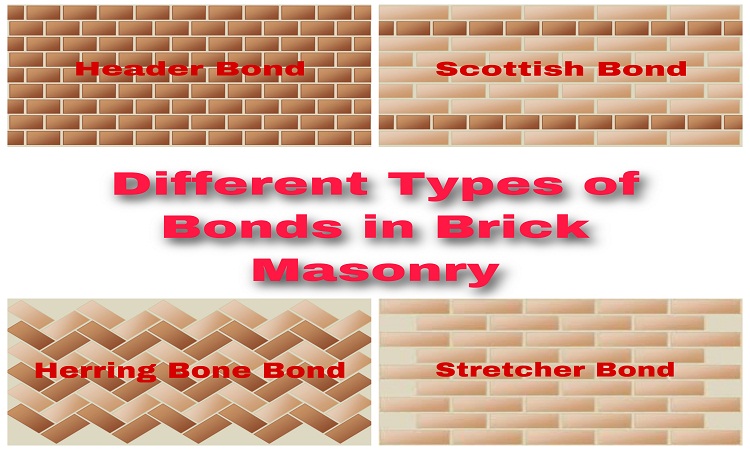 July 17, 2020September 8, 2020
Mastercivilengineer
no comment on Different Types of Bonds in Brick Masonry

Bonding is a process of arranging bricks and mortar to tie them together in a mass of brickwork. It is a weak portion of brickwork and therefore should not be continuous in two successive courses. A wall having continuous vertical joints will act as an independent column, hence in such cases load on the wall will not be uniformly distributed and there are chances of appearance of cracks between the two surfaces, later resulting in separation of masonry on two sides of the continuous joint.

The bonds are classified as follows:

In English bond alternate courses of headers and stretchers are laid. It is necessary to place the queen closer after the first header in the heading course for breaking the vertical joints.

In this bond alternate headers and stretchers are laid on each course. This type of bond is better in appearance than the English Bond. The facing & backing are of the same appearance. Brickbats are used in case of walls having a thickness equivalent to an odd number of half bricks. The queen closer is placed next to the quoin header in alternate courses in order to break the continuity of vertical joints.

This bond comprises of double Flemish bond facing and English Bond backing in each course. The advantages of both the type of bonds are incorporated in this type of construction. The minimum thickness of the wall where his type of bond is used is 1 ½ brick.

In Flemish Garden Wall Bond instead of heaving one stretcher and one header, here we have three in one (3 in 1), three number of the stretcher, and one header in the same course. It is also known as balanced bonding.

In this type of bond, the brick is laid with its length parallel to the face or front or direction of the wall. The course containing a stretcher is called a stretcher bond.

The brick is laid with its breadth or width parallel to the face or front or direction of the wall. The course containing headers is called a header.

The arrangement of bricks in English Garden Wall Bond is similar to that of English Bond except that the heading courses are only inserted at every 4th or 6th course whereas a stretcher is used in consequent courses every 3rd, 5th, or 7th. In short, the arrangement consists of one course of header and three courses of stretchers. The queen closer is placed next to the queen header of the heading course forgive the necessary lap.

The Scottish Bond has five courses of stretchers between every course of headers. The lap is generated by the use of headers as quoins for the even-numbered stretching courses, counting up from the previous heading course, with queen closers as the penultimate brick at end of the heading courses.

In Raking bond the bonding bricks are laid at an angle in the face of the wall. This type of arrangement helps to increase the longitudinal stability of thick walls built in English bond.

There are two pattern of raking bond:

In this type of bond suited for very thick walls usually not less than four brick thick. In this pattern of brickwork, bricks are laid in course inclined 45o in two directions from the center. This type of bond is also commonly used for brick paving.

It is best suited for walls of two or four brick thickness. Diagonal bond is normally introduced at every fifth or seventh course along with the height of the wall. Bricks in the diagonal bonds are placed end to end in such a way that extreme corners of the sequence remain in contact with stretchers.

Zig Zag Brick Bond is very similar to herring hone bond only difference in this bond is that in this case the bricks are laid in a zig-zag pattern. It is mostly adopted in brick-paved flooring.

This type of brick bond adopted for thick walls, where the facing and backing are chosen to be constructed with bricks of different thicknesses. Typically, this bond consists of a heading and stretching courses arranged in a manner that one heading course comes after quite a lot of stretching courses.

The load distribution of walls using facing bonds is not uniforming because of the difference in the facing and the number of joints in the backing. This can also lead to unequal settlement of the two thicknesses of the wall.