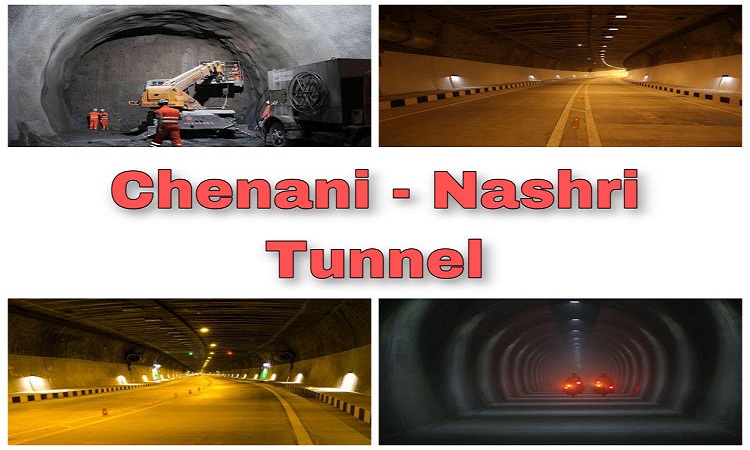 The Chenani – Nashri Tunnel (also known as Dr. Syama Prasad Mookerjee Tunnel) is India’s longest road tunnel completed in the Udhampur district of Jammu and Kashmir. The 9.2 km long road tunnel is a major road tunnel project in Northern India and the biggest of the country which includes (9 km Main Tunnel + 9 km Escape Tunnel + 1 km Cross Passage = total tunneling done is 19 km. The highest progress achieved in a Month from 4-Faces was 850 m which is a record in the Himalayan Tunnel by NATM.

IL&FS Transportation Network Limited has produced a Masterpiece, state of art tunnel, and this tunnel is a stunning example of an engineering marvel. The Shivalik mountain range of the great Himalayas now hosts India’s longest 2-way traffic road tunnel. This 9.2 Km tunnel is different from many other tunnels in India as well as other parts of the world as it is a two-lane tunnel with a parallel escape tunnel connected with 29 Nos. cross passages.

It will reduce 30 Km distance from Jammu to Srinagar and reduce traffic jams on NH – 1A that occur due to snowfall and avalanche in winter at Patnitop. In addition to the main road tunnel, there is a smaller parallel escape tunnel for emergency services for persons and extraction of smoke from a fully Transversal ventilation system in case of fire and accident.

The Uniqueness of the Project / Innovation done in Project

Rock mass: Sedimentary deposits of mudstone and sandstone of the Murree Formation with a typical alternation of sandstone and siltstone or claystone beds.

Concrete Grades used in the Project

In the project, various grades of concrete starting from M15 to M40 were used. Different grades were used for different application as shown below :

Construction of the Chenani – Nashri Tunnel

Construction used the New Austrian Tunneling Method (NATM) Technique. Under NATM, the tunnel was sequentially excavated and supported. The project was of complex and complicated nature as it involved cutting of Himalayan rocks. Advanced tunneling and drilling equipment were used for the project.

Tunnel construction began in September 2011 and was completed in early 2017.

Chenani – Nashri Tunnel is found to be challenging during excavation of the tunnel due to uncertain, difficult, extremely variable, and complex geological conditions emerging out of the young Himalayan mountain building process.

Moreover, extremely rugged, densely forested, and inaccessible topography limit the scope for investigation which finally becomes a cause of concern during execution due to geological problems like sudden ingress of water in the North portal towards Nashri and interception of shear/fault zones in the South portal because negotiating low vertical and lateral cover zones and at Middle high-stress conditions inside tunnel resulting in rock bursting and squeezing, high-temperature condition inside tunnels.

Road connectivity due to landslides, snowfall, and the traffic jams were also a major huddle many days in the raining and winter season during the execution of the project.

Social and political reasons also disrupted the Project work in tendon many days.

Labour unrest was the most affecting factor that has a disruption in the execution of the project for more than 150 days.

Chenani Nashri Tunnel which is an underground safety standard to be adopted to ensure safe and efficient passage to commuters.

International safety standards have been adopted for this tunnel:

Some Interesting Facts about the Chenani – Nashri Tunnel is as below: